The National Football League’s Chicago Bears announced that they have agreed to make BetRivers the exclusive sportsbook for the team. Officials from both camps believe that the multiyear partnership will prove to be mutually beneficial, as the sports betting industry continues to grow throughout the country. The new deal is one of the many gaming deals that have been penned between a professional sports teams and prominent sportsbooks over the past year, which shows how far the gaming landscape in the country has changed since the Supreme Court lifted the ban on sports betting in 2018. The Bears’ new deal will certainly impact revenue and the fan experience for the upcoming season, but the deal could also have an even greater impact on the team’s future, addressing an ongoing issue regarding their stadium.

What the Deal Means 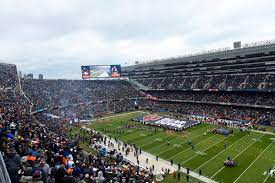 social, and print assets. The deal also offers BetRivers the unique opportunity to be the Title Partner of the Bears’ customized free-to-play game on the Chicago Bears Official App offered through Verizon Wireless. Users on BetRivers sportsbook can expect to see a number of new collaborative promotions for exclusive Chicago Bears prizes when placing wagers on the app or site.

Bears officials and representatives from Rush Street Gaming, BetRivers parent company, have lauded the deal as an encouraging partnership between two hometown giants. Bears President and CEO Ted Philips believes that the new partnership will give fans the opportunity to engage with and experience the game in new and exciting ways, while also growing their relationship with a “hometown company.” Self-proclaimed lifelong Bears fan and Executive Chairman and Co-Founder of Rush Street Interactive and Gaming Neil Bluhm echoed Phillips’ Comments. Bluhm shared that BetRivers and Rivers Casino are honored to partner with the Bears, and that they look forward to offering fans a new experience that will evolve in the coming years.

Striking While the Iron is Hot

In recent years, the NFL has completely reversed their stance on sports betting, allowing teams to explore new partnerships like the one the Bears announced on Tuesday. In fact, the deal between the Bears and Rivers Casino is actually the second gambling deal the team has made. Last year, the Bears partnered with PointsBet, another online sportsbook. With the announcement of the BetRivers deal, PointsBet will no longer be a Chicago Bears partner.

With the new deal, the Chicago Bears join a number of other professional sports teams throughout the United States who have recently launched gaming deals of their own. Both the Washington Football Team and Major League Baseball’s Washington Nationals have recently announced sportsbook partnerships of their own in the past year. Even the NFL has announced new partnerships with Caesars Entertainment, DraftKings, and FanDuel. Many other sports teams are exploring additional sport betting partnerships, hoping to capitalize on the opportunity to revolutionize the fan experience and generate new revenue. The slew of new agreements marks a significant cultural shift for professional leagues who have historically shunned the idea of coupling professional sports with gambling. As the sports betting industry has grown throughout the country, professional teams have sat back and watched as fans did what they could to make themselves part of the action. Now these teams will facilitate this transition.

Implications in the Hunt for a New Stadium

Recently, the Chicago Bears have expressed interest in leaving their historic Soldier Field in hopes of building a new state-of-the-art stadium, and their new partnership with Rivers Casino could have a big influence in that decision. Officials recognize that Soldier Field has fallen behind the standard for NFL stadiums, with a capacity of just 61,500. The current stadium sits in a park that blocks the bears from building upon the existing structure or expanding to surrounding areas. Additionally, the Bears lease with Soldier Field runs until 2033, but the contract does include provisions under which the team could buy out the lease.

What’s more, the Bears announced a formal bid to buy Arlington International Racecourse, a 300-acre horse track in Arlington Heights, which could become the site for a future Chicago Bears stadium. Arlington International Racecourse is set to close for good on Sept. 25th and happens to be owned by Rivers Casino. The new deal between the Bears and Rivers Casino has caused some speculation about whether or not a stadium relocation could become a reality in the very near future, but Chicago Mayor Lori Lightfoot has dismissed the possibility of the Bears making a move.

Regardless of whether or not a move is in the works, the Chicago Bears are looking forward to starting the new season under the new partnership. As the multiyear deal continues to grow, time will tell whether or not the partnership could lead to something more.