There are some in the Kentucky legislature calling for a response to the decision regarding slot gaming made by the Kentucky Supreme Court on Thursday. This past week, the Court ruled in a unanimous decision that the Historical Horse Racing system, a lot-like gaming terminal, does not constitute pari-mutuel wagering. This decision overturns a 2018 ruling by a Franklin Circuit Court judge.

The problem as seen by the Kentucky Supreme Court was the definition of pari-mutuel wagering and how that impacted one of the state’s staple forms of gaming. 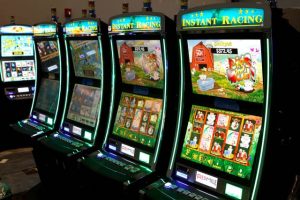 They are located in the state’s various horse tracks where slot style gaming is legal. Casino gaming is still considered illegal in Kentucky. It is the state’s horse racing commission that regulates the terminals.

The terminals themselves closely resemble slot machines. The operation and game play is almost identical as well. What sets HHR terminals apart is that the outcome of a “spin” is determined on the results of a past horse race. The games claim to be pari-mutuel meaning that the operator does not hold any stake in the outcome. The total, net pool of wagers is returned to the players because the players are betting amongst themselves.

The horse tracks and the state horse racing commission argued that the gaming terminals did constitute true pari-mutuel wagering even if the players were betting on different races or at different times. The Kentucky Supreme Court wholly rejected this expansive take on the definition. “Emphatically, such patrons are not wagering among themselves as required by pari-mutuel wagering,” said the Court.

“We acknowledge the importance and significance of this industry to this Commonwealth. We appreciate the numerable economic pressures that impact it. If a change, however, in the long-accepted definition of pari-mutuel wagering is to be made, that change must be made by the people of this Commonwealth through their duly-elected legislators, not by an

appointed administrative body and not by the judiciary,” said the Kentucky Supreme Court.

There are those who support the Kentucky Supreme Court’s decision. The Family Foundation of Kentucky is a socially conservative group that has been on the opposite side horse tracks and would be casino operators in Kentucky for nearly ten years. Martin Cothran is the Foundation’s Executive Director; he hopes the race tracks will comply with the Court’s decision and voluntarily shut down their HHR terminals. Stan Cave is the Foundation’s attorney and said, “If the Kentucky Horse Racing Commission does not follow the laws applicable to it, then the Family Foundation of Kentucky will evaluate options to enforce the Supreme Court opinion in all other available venues.”

Many in the state’s legislature however, see the decision as only hurting the state’s workers and a lucrative industry. Senator and Majority Floor Leader, Damon Thayer, said the decision was a terrible example of judges legislating from the bench. He said, “we’re literally talking about thousands of jobs and a huge economic impact for Kentucky.” Unless the Court reverses its decision, Thayer says the ruling “could reopen the door for casinos in Kentucky, which would be regrettable.”

Kentucky Governor Andy Beshear hoped the Supreme Court would uphold the legality of the long-favored practice. He said, “historical horse racing is an important part of Kentucky’s economy that supports jobs and contributes over $21 million to the state budget. We are working with various partners to find a path forward.”