The Nebraska Supreme Court heard arguments both for and against allowing casino gambling in the state. Proponents and opponents appeared before the Court’s seven members to argue whether three different voter initiatives should appear on the state ballot.

The initiatives seek to amend the state constitution to allow for casino gambling in the state’s racetracks. They also include provisions to regulate and tax the activity.

Bob Evnen, Nebraska Secretary of State, in August rejected putting these same initiatives on the ballot. The Supreme Court will determine whether or not to overturn his decision. Evnen said that the initiatives failed to clearly address the issue of gambling within the state, saying the language could cause confusion for voters. He expressed another concern that voters might not appreciate the breadth of such a move. These same initiatives have the potential to open up casino gambling on Native American lands in Nebraska as well. 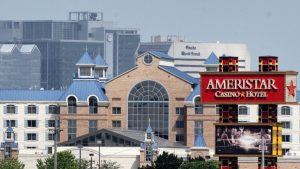 gambling in the state. A portion of tax revenues collected would be directed towards property tax relief and other fiscal goals. Evnen also objected on the grounds that this could be construed as granting monetary favors for votes.

David Lopez, in a legal brief representing opponents to the ballot measures, said that the initiatives are “fundamentally deceptive, multi-subject constitutional amendment measures.” He continued, “the underlying constitutional initiative, by its plain text, would have Nebraska voters believe they are simply authorizing the expansion of gambling at licensed racetracks. In reality, it would additionally and automatically authorize full scale casino gambling on tribal lands across Nebraska.”

Andre Barry is an attorney who represents the pro-casino organization “Keep the Money is Nebraska.” He thinks that the lengthy legal briefs presented by anti-gambling groups only serve to confuse the legislature and muddy the political waters. “There is no hidden authorization of Indian gaming,” he said. “This action is a matter of public record.”

Many in the Nebraska horse racing industry see the life saving potential of these proposed initiatives. For some time, the horse track industry has been experiencing stiff competition from neighboring states and other forms of gaming. Experts in the gaming industry have estimated that casinos placed in the state’s six racetracks could generate hundreds of millions of dollars in revenue and create thousands of much needed jobs.

Historically, the Nebraska Constitution has made gambling illegal since the nineteenth century. Since that time several amendments to the state constitution have opened up betting in different forms. Horse racing, keno, bingo, and a popular state lottery were slowly introduced to Nebraska. The proposed initiatives, if voted on and passed, would open up extended gaming in the state’s racetracks.

If the proposed initiatives are to be a part of the state ballot in November then the Nebraska Supreme Court will need to make their decision fast. The deadline to finalize Nebraska ballot measures is September 11.