The governor details his reasons for opposing yet another attempt by special interest groups in the state to legalize casino play. His first reason is the human element to gambling and some of the negative repercussions that are all but assured in states where gambling has been made legal. He 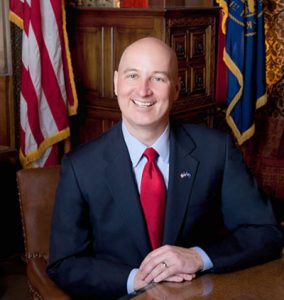 states, “for every $1 a community gains from casino gambling, it pays $3 in social costs.” The costs he is referring to include regulation and policing of the industry. In addition, communities must deal with the negative fallout from problems such as gambling addiction and the impacts of that addiction on families.

Communities where casino gambling is legal face the uglier ramifications to an addict’s need to gamble. Child abuse, bankruptcy, spousal abuse, and a breakdown of the family unit are just a few examples of results that can be traced back to gambling addiction. The Governor goes on to cite several recent examples of how the lure of casino play, even out of state, has affected Nebraskans.

“In 2012 a Nebraska state senator pleaded guilty to illegally spending campaign funds at casinos in Kansas. In 2016 a Lincoln pharmacist was sentenced to nine years in prison after defrauding Nebraska’s Medicaid program of $14.4 million. He squandered the money playing craps and blackjack at casinos in Council Bluffs. Also in 2016, a bookkeeper at an Omaha travel agency was arrested for stealing $1.2 million from her employer to cover gambling losses incurred at Iowa casinos.”

In addition, the governor notes that despite expectations of increased jobs and wages, casinos can in fact drain a community of its economy. He cites a study published by the American Indian Law Journal where native American operated casinos actually increased the poverty rates in their communities. With an increase in poverty, comes an increase in the homeless population. Unfortunately, casinos are often unable to generate the revenue they expected in order to offset these economic pitfalls.

One of the major advantages to legalizing casino play is the tax revenue. Time and again, the revenue potential of legalizing the gambling industry is pointed to by activists and pro-casino legislators. Governor Ricketts addresses this prong of the argument by citing examples of where that revenue repeatedly came in under expectation.

Massachusetts legalized casino play in 2011. At the time, proponents argued that there was huge revenues to be generated by taxing the industry and that such revenues could be put to good use for Massachusetts residents. However, in a 2019 Boston Globe article, it was reported that casino revenues had consistently fallen short of industry projections. The article reads, “during the years of debate over whether to allow casinos in Massachusetts, proponents invariably returned to this point: The state was losing out on a revenue jackpot enjoyed by Connecticut and other states where gambling was legal. But with the Massachusetts gaming industry up and running at three sites, the bonanza casino operators promised when they applied for licenses here has yet to materialize.”

The governor ended his letter with a call to action by Nebraska voters. Initiatives 429, 430, and 431 will be up for Nebraskans to decide.