Ohio has been mulling over the legalization of a sports betting bill for, and now the state is hopeful that it could launch its first sportsbook as early as this summer. Sen. Kirk Schuring, a Republican from Canton, is responsible for the new bill, which he plans to officially introduce sometime in the month of April. Schuring is also the acting chair of a state Senate sports gambling panel, which held its final hearing on Wednesday to discuss the final draft of the bill. At the conclusion of the meeting, Schuring shared that the mysterious bill will be officially introduced in the next two weeks.

Tight-Lipped About the Details

There is a lot of optimism surrounding Schuring’s sports betting bill, but not a lot is known about the details. Ohio has been battling for legal sports betting for quite some time, and debate and disagreement has often been the cause of the delay. Like many other states weighing sports betting options, Ohio officials have struggled with the regulation of legal sports betting, and how to best distribute the revenue generated. 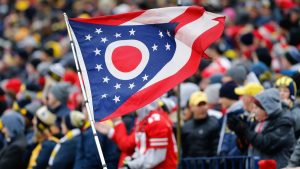 Control Commission, while others have placed that responsibility on the Ohio Lottery Commission. Both options have led to the same result: the failure of the respective bills. Many parties are working to get in on the ground floor of sports betting in the state, which may be delaying the process even further. Casinos and racinos are consistently trying to make their voices heard, as bars and restaurants attempt to do the same, albeit with less leverage. Even professional sports teams are vying for an opportunity to offer legal sports betting, as teams in other parts of the country like the Washington Nationals are preparing to open sportsbooks in their own stadium.

So far, casinos seem to have the strongest foothold in the potential sports betting bill, and the belief is that they would operate a limited number of “skins,” or gaming brands that could be sub-let to other companies like FanDuel or DraftKings. More liberal approaches to sports betting legislation could include granting bowling-allies and convenience stores the opportunity to operate sportsbooks. As more and more constituents voice their opinion, it seems as though sports betting legislation becomes a more tangible reality for residents in Ohio.

Operating Under a Deadline

Despite the fact that lawmakers have not been forthcoming about the specifics of the newly proposed bill, they are still hopeful that legislation could become a reality as early as this summer. Senate president Matt Huffman shared that the ultimate goal is to develop legislation into a state budget bill that has a state constitutional deadline of June 30. Last year sports betting legislation made its way through the house, and eventually fell to the wayside when it reached the Senate, but many believe that the latest bill will overcome that. Other officials have echoed Huffman’s opinion, stating that sports betting legislation is “inevitable,” regardless of whether or not the June deadline becomes a reality.

Both the Governor and the Senate appear to agree that Ohio is finally ready for legal sports betting, which bodes well for the optimistic deadline. In order for legal sports betting to become law, it must receive the approval from both the House and Senate before finally being signed by Gov. Mike DeWine. Many will be keeping their eyes open for the bills official reveal later this month.